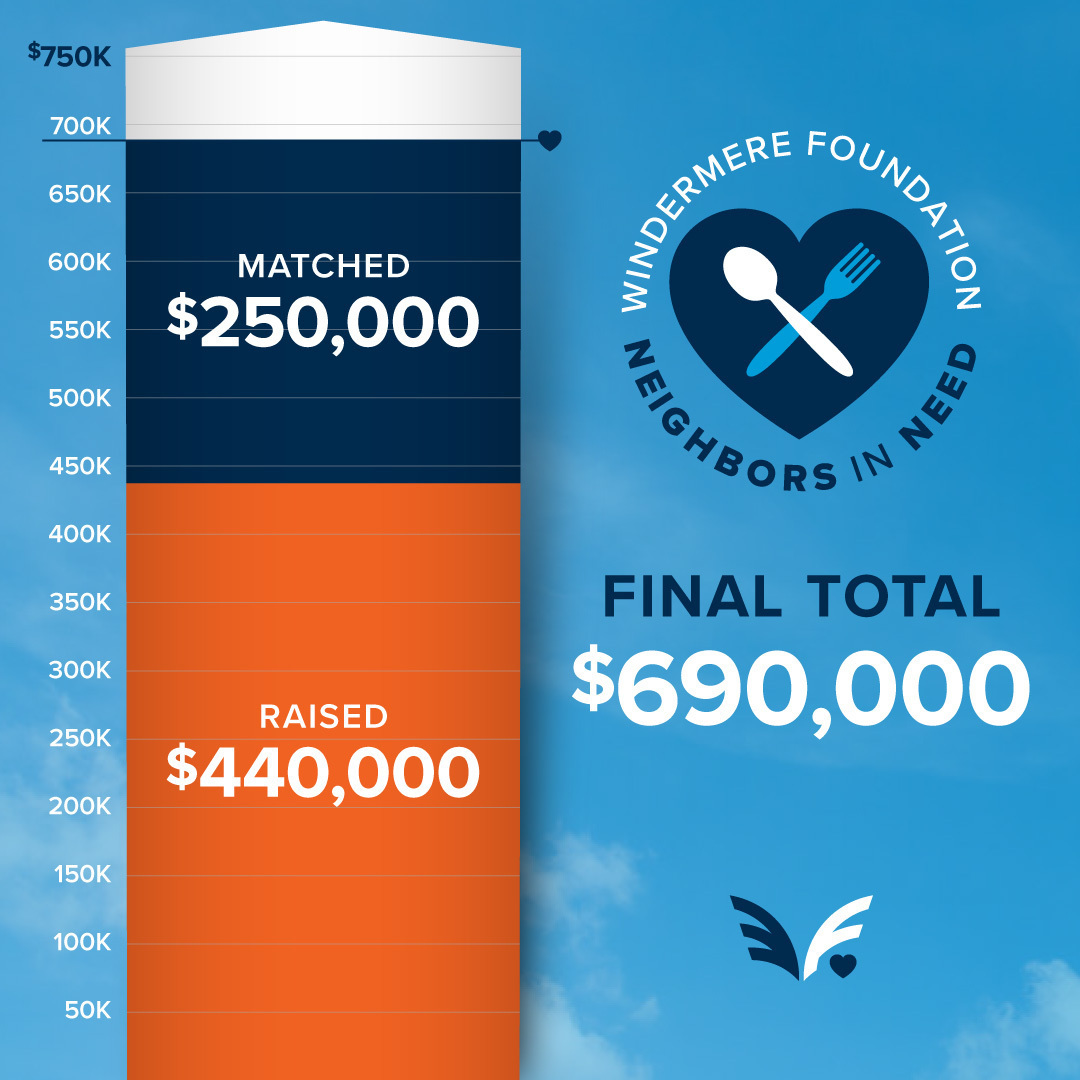 The COVID-19 pandemic has affected populations across the globe, but those who struggle with poverty and count on food programs to meet their basic day-to-day needs are in an especially uncertain place. While coping with increased demand and a bottlenecked pipeline of food supply, food banks are desperate for funds to continue to serve their communities. Because of this, Windermere decided to challenge its offices to raise $250,000, every dollar of which would be matched by the Windermere Foundation and donated to food banks in the areas where Windermere operates. We titled it the “Neighbors in Need” fundraising campaign.

Neighbors in Need kicked off on April 21, with the goal of raising $250,000 by May 5. As word continued to spread, online donations and contributions from both our agents and the public began to increase. Neighbors in Need was given a boost by Seattle Seahawks starting safety Quandre Diggs in a heartfelt message encouraging support. Over the final 24 hours, leading up to the May 5 deadline, support poured in from across the Windermere family as the final figure exceeded the initial goal of $500,000, landing at a total of $690,000.

Neighbors in Need exemplifies Windermere’s deep commitment to supporting our local communities, which traces back to 1989 when the Windermere Foundation first started. Since then, we’ve proudly raised more than $41 million for low-income and homeless families throughout the Western U.S.

On behalf of the Windermere Foundation to all those who joined the effort: Thank you. We could not have made this large of an impact without your help. We are humbled to be able to do our part to help those who need it most during these uncertain times.

Related Articles
community The Fire’s Impact Our heart goes out to all of the people impacted by the Marshall Fire in Boulder County. If you would like to give your support, we have set up a special fund through the Windermere Foundation where we will match any donation you make up to $5000. You can make that donation HERE. This devastating […]
Colorado Real Estate Windermere Foundation Approaches $1.5 Million Raised in 2021 Windermere offices across the Western U.S. have remained committed to serving their communities in 2021, collectively raising nearly $1.5 million so far this year alone, pushing the foundation’s grand total raised since 1989 to nearly $45 million. After a successful Community Service Day in June and a first half of the year which saw over $1 million raised, Windermere […]
Blog Windermere Northern Colorado Foundation Tailgate Party 2021 September signifies something different for everyone: for some it’s the beginning of football season, for others it’s the end of summer, but for our Northern Colorado team, September means it’s time to tailgate! Each September, for the past five years, we have hosted our Windermere Foundation Tailgate Party to raise funds and spread awareness in […]